Magic Touch Mechanical has been using Mitsubishi mini split ductless units to solve uneven room temperatures for over two decades. While the rest of the world embraced ductless technology long ago, homeowners in the US are only now catching up. Mitsubishi Electric, manufacturer of Mitsubishi mini split ductless units has remained the #1 selling brand in the U.S. for years. In 2019, they formed a joint venture with the Trane Company, known for high efficiency central air conditioners and heating systems. The new partnership, aptly named METUS (Mitsubishi Electric Trane United States), combines the long-standing experience of both companies into one.

We use Mitsubishi mini split ductless units to heat & cool the Magic Touch offices & training room in Mesa, AZ. Not only are these units incredibly efficient and quiet; they enable us to keep each room the exact temperature desired.

To gain a better understanding of how that works consider the following:

A conventional central air system has one thermostat and distributes all of the air via your ductwork. A common problem and complaint most of us have experienced with central air is uneven temperatures from room to room. You know, the thermostat is set to 78° and the master bedroom is 81°, while the living room is 76°. This situation is usually not caused by a faulty A/C unit, sometimes not even a problem with the ductwork.

Frankly, central air conditioning design and application hasn’t kept up with technology changes the way other industries have. Think about the cars of today vs. the cars of the 1940’s. Yet we’re still using the same types of design applications in HVAC we were in the 40’s! Well, not all of us… Magic Touch Mechanical installs the latest technology available for our loyal clients every day. Our clients rave about how much they love their Mitsubishi mini split ductless units!

Every room is perfect with a Mitsubishi mini split ductless unit

Now let’s think about a design like the Mitsubishi mini split ductless units at Magic Touch’s Mesa, Arizona offices. Each room (in this case offices and training room) has its own thermostat and “air handler”. They still all share the same outdoor condensing unit but are capable of being individually controlled. In fact, one room can be completely off while the next room is set to 70°. Or maybe I want my office at 74°, our Office Manager wants hers at 79° while the training room is set to 72°. We all get the exact temperature we want and can even control the fan speed and direction it blows!

There are a lot of great reasons to install a Mitsubishi mini split ductless unit on any Phoenix area home. 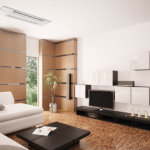 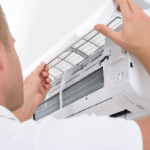 The most common and budget friendly room air handler option in the Mitsubishi mini split ductless unit lineup, the High-Wall. While we install a lot of Mitsubishi high-wall air handlers in garages and sunrooms, we install more in bedrooms & home offices. As they run several hundred dollars less than other air handler options, the savings can add up on multizone systems. If you think a wall mounted air handler doesn’t belong in a nice home, you’re in the minority nowadays. Some of the most beautiful, high-end homes we work in are switching to Mitsubishi wall mounted air handlers. They’re especially popular with our clients who have lived abroad in places like Europe, Asia, and South America where they are the norm. 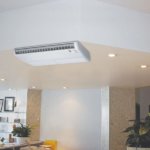 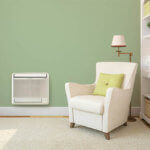 The Mitsubishi floor mounted air handler has been a popular choice with Magic Touch Mechanical clients since it was introduced. As the name suggests, this unit is mounted on a wall very close to the floor making it inconspicuous. Due to its shallow depth, this A/C & heating unit won’t get in the way of your furniture and is great next to a bed. With multi-directional airflow you can set it to blow directly on you or away from you. 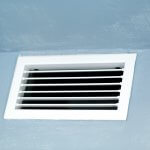 Mitsubishi mini split ductless units aren’t always “ductless,” sometimes they just use less ducts! After the high wall unit, the Mitsubishi horizontal ducted air handler is the second most chosen option by Magic Touch clients. Rather than using a central air handler connected to ductwork serving the whole home, this model uses ductwork for small areas. A common example being a master bedroom, master bath and water closet. Rather than needing 3 separate air handlers, this unit can handle all the areas completely concealed. Typical installations include attic spaces and in the ceiling itself. 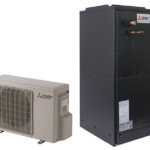 Of course, the Mitsubishi mini-split lineup wouldn’t be complete without a direct replacement option for a conventional ducted air handler. This allows the homeowner to replace an existing central air handler with a ducted air handler that will work with a mini split condenser. If you’re wondering why that would even be necessary, there are a number of reasons. Here are a few:

As if 6 choices to build the best Mitsubishi mini split unit for your home wasn’t enough, you can mix & match! If your home is best suited for both ducted & ductless to make it perfect, Magic Touch can do it. Do you want to add an auxiliary heating & cooling system in just a room or two? Magic Touch can do it. From cooling a small garage, to a 20-room state-of-the-art multi-zoned heat pump you can control from the other side of the world on your phone, Magic Touch can design and install it.