I’ll give you the answer right upfront about what your ceiling fan direction should be in the summer and winter. However, if you want to know how to save the most energy and stay comfortable you should read on.

In the summer your ceiling fan should turn counterclockwise.

In the winter your ceiling fan should turn clockwise.

What do we know?

How Do We Know Anything About Ceiling Fan Direction & Energy Use?

Magic Touch Mechanical is an HVAC Contractor, and one of the largest home energy audit companies in Arizona. We’ve been providing heating & air conditioning service to homeowners in the Phoenix, AZ area for over two decades. We’ve assessed the energy use and waste of thousands of homes over the years. Often, our recommendations to save energy are “lifestyle” related.

If you live within 35-miles of Mesa, AZ and want to schedule a home energy audit with Magic Touch Mechanical: SEND US A MESSAGE TODAY!

Many people think they can lower their power bills by turning the A/C temperature up & using the ceiling fan. This is true only if you’re home. Think about how you feel cooler on a breezy summer day as opposed to when there’s no breeze. The cooling effect happens as the breeze evaporates your perspiration (sweat).

The only good reason to run your ceiling fans if you’re not in the room is odor control. This is especially true of smokers’ homes. However, keep in mind you are paying to run the ceiling fan motor. The most efficient motor is one that’s off! 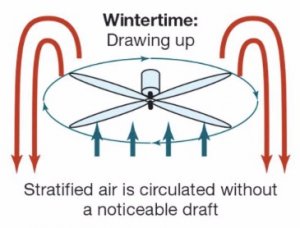 By changing your ceiling fan direction to clockwise (reverse) in the winter, you’ll stay warmer!

How Does Changing the Ceiling Fan Direction Keep People Warmer in the Winter?

One fact most of us never forget from middle-school science class is that heat rises. By changing our ceiling fan direction to reverse, we’re forcing that warm air downwards.

To avoid feeling chilly, we recommend running the fan at a low or medium speed in the winter. This will gently draw the cooler room air upwards, displacing the warmer air near the ceiling. The warmer air is pushed outwards toward the walls and downwards towards the room’s occupants.

How Does Changing the Ceiling Fan Direction Reduce Energy Usage in the Winter?

Your home heating system utilizes more power than your ceiling fans. This is especially true of older gas furnaces, strip-heaters, and heat pumps. In a heat pump for example, both the indoor & outdoor motor as well as the compressor are all consuming energy while running.

Your ceiling fan motor uses a fraction of the energy your heating system does. Therefore, since we know changing the ceiling fan direction keeps us warmer, we can run our heater less.

The reason we want to run the fan at a lower speed is to avoid the “wind chill effect”. We want to force the warm air outwards & downwards, but not feel the breeze.

How Does Changing the Ceiling Fan Direction Reduce Energy Usage in the Summer? 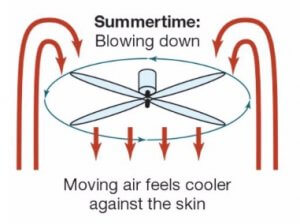 Changing the ceiling fan direction back to counterclockwise in the summer adds wind chill effect. Think about those words, wind and chill. Both are welcome in the summer and not in the winter.

Much like the ceiling fan direction effects comfort & energy use in winter, the same is true in summer. Your air conditioner accounts for about 50% of your total annual energy use. By using the ceiling fan to cool you and your family, you can run your AC unit less!

Magic Touch Mechanical has maintained an A+ record with the AZ BBB for over two decades. We’re also proud to be a winner of the prestigious BBB Torch Award for Ethics, and 2x finalist.

Other notable awards are:

READ MORE “ABOUT US” FROM OUR HUMBLE BEGINNINGS TO TODAY!