Usually when we hear “2.0” we think “next generation,” – the 2.0 must’ve replaced the previous version. In the case of Bosch Heat Pumps, that’s not what happened. Both the Bosch 1.0 and the Bosch 2.0 will continue to be manufactured. The Bosch 2.0 is not a replacement for the Bosch 1.0 – it’s a new addition to the Bosch HVAC lineup.

Bosch Side by Side Comparison

Cosmetically, both models look the same except the color. The Bosch 1.0 is tan/brown, and the Bosch 2.0 is silver/gray. While both the air handler & condensing units have a quality powder-coated paint finish, the Bosch 2.0 looks more high-end. The Bosch 1.0 nameplate badge is an adhesive sticker on a removable plastic badge. The Bosch 2.0 however is silk-printed right on the metal cabinet itself giving it a more “finished” appearance. 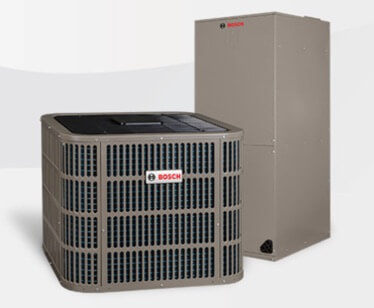 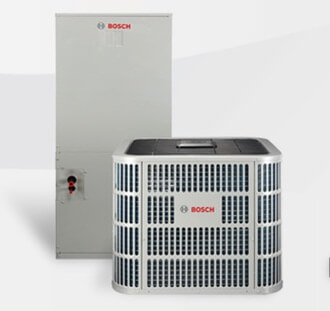 Another key difference between the Bosch 1.0 vs. the Bosch 2.0 is the outdoor fan motor technology utilized by each. While the 1.0 is equipped with a traditional PSC (Permanent Split Capacitor) motor, the Bosch 2.0 has an improved 10-speed ECM motor. The difference between the two boils down to efficiency and noise levels. The PSC is simply an on/off 1-speed motor like those found in older heat pumps. The 2.o’s ECM (Electronically Commutated Motor) has 10-speeds delivering just the right amount of airflow across the coil needed at the time.

Speaking of noise levels, Bosch engineers deserve a lot of credit when it comes to keeping things quiet. Both the Bosch 1.0 and 2.0 are quieter than most of their competitors quietest units. You will not be disappointed with either model if low noise levels are important to you.

Cosmetic differences are similar to those of the outdoor condensing units on the Bosch 1.0 vs Bosch 2.0. So, let’s skip to a few of the more notable differences in the internal components of the indoor air handler units.

Both the Bosch 1.0 and the 2.0 utilize an ECM blower motor for delivering conditioned heating & cooling to your home. However, the 2.0 now includes a 2-speed blower motor as opposed to a single speed motor in the 1.0.

Evaporator coil construction is different in both models as well. While the 1.0 coil is built with copper tubing, the 2.0 is constructed completely from aluminum. After multiple lawsuits against other manufacturers (Bosch not included), most manufacturers have switched to aluminum tubing in their evap coils. The lawsuits claimed formicary corrosion caused by household chemicals caused refrigerant leaks in the copper tubing. As a result, we see a lot of aluminum evaporative coils in premium brand units now.

While this matters more to an HVAC service technician than to most homeowners, the TXV has changed in the 2.0 as well. A TXV (Thermostatic Expansion Valve) is a metering device that controls the flow of refrigerant in a heat pump. The Bosch 2.0 Variable Speed Inverter Heat Pump has an adjustable TXV, whereas the 1.0 is non-adjustable.

Bosch 1.0 vs 2.0 Differences in Efficiency

Both the Bosch 1.0 and 2.0 are in the ultra-efficient class largely due to the inverter compressor technology powering both. As you might expect, the 2.0 clocks even higher efficiency ratings than it’s older sibling, topping out at an impressive 20.5 SEER/13EER

I’ve written several reviews on various Bosch Heat Pump systems, including their new variable speed package unit, (the only variable speed package unit on the market). I still feel the Bosch split heat pump 1.0 and 2.0 have a “sweet spot” in the marketplace right now. While all the premium brands have excellent inverter driven heat pump offerings in 2020, Bosch is significantly less expensive.

In fact, both the Bosch 1.0 and 2.0 variable speed split heat pump can be installed for less than some of their competitors 2-stage units! Would I own one personally, without a doubt – and I’d install one in my own Mom’s home!

It covers all the bases. It’s quiet, efficient, and has an excellent 10-year parts warranty (when installed by a Bosch ABC (Accredited Bosch Contractor). Most importantly, it’s a variable speed inverter which when experienced, is leaps & bounds better than 2 or single stage AC & heat.

You wouldn’t be disappointed with either to be completely frank. Yes, the 2.0 is a smidge more efficient, has a slightly quieter outdoor fan, and is a little sleeker looking. However, the Bosch 1.0 is a very nice machine with the exact same compressor and is a lot of bang for the buck. It really boils down to your budget. The cost between the two is hundreds, not thousands, so if you got it – got for it. If not, you won’t have buyers remorse with the 1.0 either!

Just one word of advice when it comes to buying a new Bosch Heat Pump System: Buy one from the company that has installed more Bosch units than any HVAC Contractor in Arizona – Magic Touch Mechanical!

How Much Does a New Air Conditioner Cost