What’s a Good SEER Rating for an AC

What is a Good SEER Rating for an Air Conditioner, I Don’t Know What to Choose!

When I started working in the air conditioning industry thirty years ago, a SEER rating for air conditioners weren’t even a thing yet. It wasn’t until 1992 that minimum air conditioner efficiency ratings came into effect with legislation requiring all HVAC equipment manufacturers to produce new AC units that were at least 10 SEER. In 2006, the minimum was raised to 13.0 , and again in 2015 to 14.0.*

The 2015 changes were regional, and still allow 13 SEER in parts of the country – here in Arizona, the 14 SEER minimum applies to all new ac unit installations.

More than 25-years after minimum efficiency ratings were first required, we frequently get questions like: Is 14 SEER AC good? What does up to 16 SEER mean? and, Is it better to have a high SEER or a low SEER?

Chances are you already know that SEER is the acronym for Seasonal Energy Efficiency Ratio, but what is it and how is it calculated?

The Seasonal Energy Efficiency Rating of an air conditioner is basically a measurement of the amount of cooling produced during an average summer, divided by the total amount of energy it consumed to produce that cooling.

So, the answer to the question; Is it better to have a high or a low SEER? – is the former. The higher the rating, the less energy used to produce the same amount of cooling as a lower SEER unit. I emphasize “the same amount of cooling”. A higher SEER rating does not mean more cold air, or colder air, it simply means it produces that cold air more efficiently – meaning lower utility bills for the end user.

What is the Difference Between SEER and EER?

I was inspired to write this article after reading a comment on the Facebook Group, Living Chandler (a group for residents of Chandler, AZ), where an internet expert (I say that jestingly), commented that SEER was a “…made up number created by AC Companies to sell more expensive units.” I know what you’re thinking – there is no bad information on the internet so he must be right!

Those of you have read this far, now know that SEER is calculated by a mathematical equation so to say it is a “made up number” is equivalent to saying math is subjective! He went on to say, “…the real number you need to pay attention to is the AC unit’s EER.”

EER stands for Energy Efficiency Ratio, i.e. removal of the word “seasonal”. We covered the fact that SEER considers a typical cooling “season” already, EER however measures the cooling output under specific conditions vs. the changing conditions that happen over the course of an entire summer.

When calculating an air conditioners EER, the specific conditions generally used are; 95°F ambient (outdoor) temperature, 80°F indoor temperature, and 50% RH (Relative Humidity). The reason for both calculations is that SEER is more of an indication of how efficiently an AC unit will perform over an entire season, whereas EER is more specific under known conditions.

That said, the Facebook commenter was ill-informed in thinking (and then spreading) that “SEER was made up”. In fact, there is also a mathematical equation that can be used to figure out an air conditioner approximate EER based on its SEER. The equation is; EER = 0.875 × SEER. There’s that pesky math again going against the wisdom of people on the internet!

READ THIS BEFORE TRUSTING THIS CHART!

This SEER Chart will give you a general idea of the savings percentage you can expect on average between the different SEER ratings. However, this chart and others like it should not be relied upon for an exact savings. I like to use these percentage of savings charts vs. the ones that show an actual dollar amount for the following reasons:

At Magic Touch Mechanical, we like to under-promise and over-deliver when it comes to estimating actual savings for our clients. However, we have more than a few reviews that say they saw a 30%, 40%, and even one claiming a 47% reduction in their summer power bills. Usually these reviewers don’t give enough credit to the other home improvements we made (like repairing and sealing their air ducts for example) and give the new ac unit all the credit. 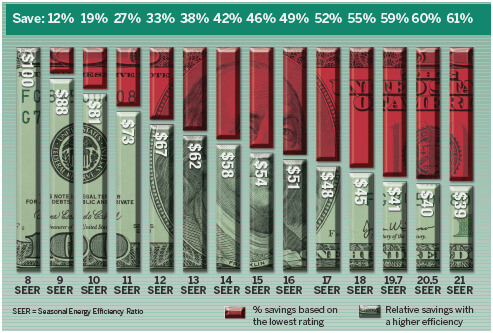 As you can see in the chart above, choosing to install a new 14 SEER unit as opposed to a 16 SEER unit will mean paying about 7% more on your power bill, and about 18% more than having installed a 20 SEER unit. Of course, there are many other variables in play, and we need to consider them.

Is a Higher SEER Rating Worth the Price Difference?

I can give one prime example of a scenario where a higher SEER rated AC unit is NOT worth the difference in price from a lower SEER unit – when the house has energy waste problems. If your home has poor duct design or leaky ducts, insulation issues (especially attic insulation issues), is overly leaky, etc., buying a high-efficiency air conditioner will not overcome your problems.

In these cases, I’m almost always going to recommend fixing the cause of the energy wasting home deficiencies first – even if it means the remaining budget only allows for a less efficient ac unit. This will guarantee a better return on investment.

Choose 16 SEER or Better for an Energy Efficient Home

That said, if the home is already energy efficient, my next question is typically; How long do you plan on being in the home? Whenever someone tells me they are in their “forever home”, or a number of years, I’m usually going to recommend buying something at least 16 SEER, because we can usually assume a relatively quick ROI (return on investment) and high SIR (savings investment ratio).

When is an 18 SEER or Better Air Conditioner Worth It?

There is an estimated 11% energy savings between an 18 and a 22 SEER air conditioning unit…nothing to scoff at, but the cost difference between these two could be hundreds, and usually thousands, of dollars (depending on brand, rebates, etc.).

No doubt, because of the fact that higher efficiency air conditioners are more feature-rich, quieter, and result in significantly lower utility bills, most manufacturer customer surveys show people who purchased these units are happier with their choice of brand and model than those who purchased entry and mid-efficiency models.

Features like variable speed compressors coupled with variable speed blower motors can maintain room-by-room temperatures to within ½ a degree even on the harshest summer day – something that can’t be expected from a single stage ac unit.

For these reasons, I recommend buying “comfort” not efficiency when considering the “Rolls Royce models”. The Chevy, Nissan, and Rolls will all get you to where you want to go – but the ride is different!

Do you live in the Magic Touch Mechanical service area? If so, and you are considering a new air conditioning and heating system for your home or office, we’d be delighted to show you how we earn lifelong clients! Contact us today and schedule a free home evaluation and quote.

You may also like: 5 Things to Know When Buying a New AC, and Should I Buy a Cheap New AC Unit?