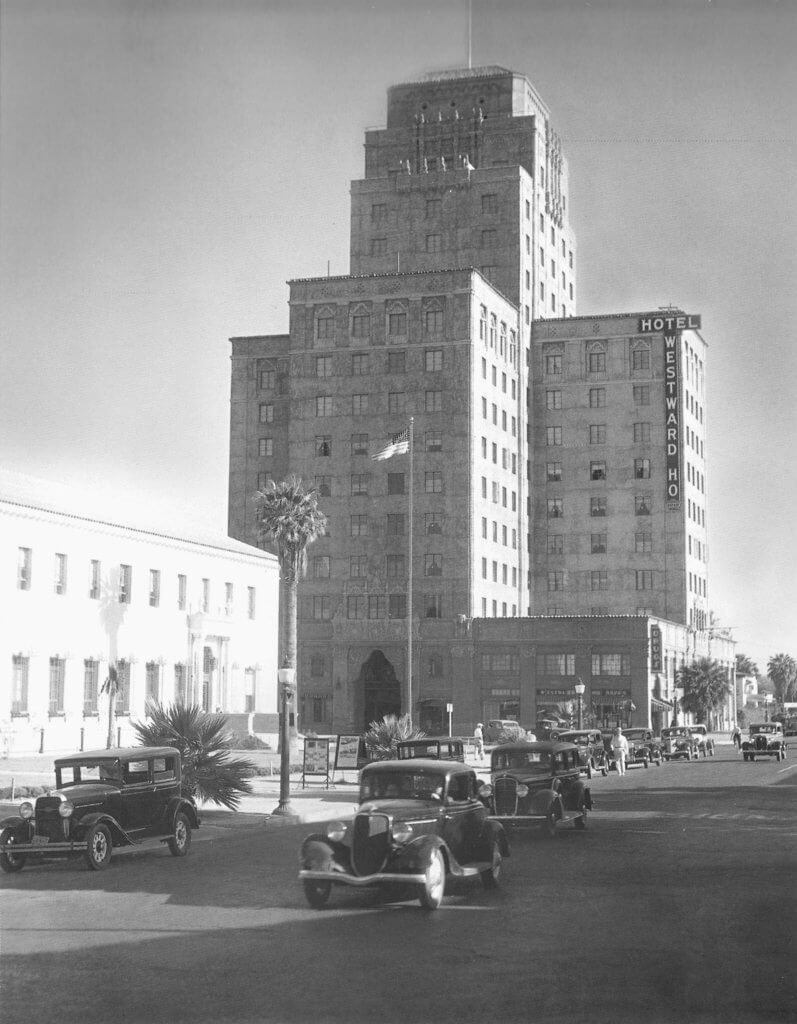 Hotel Westward Ho, Phoenix, AZ. The first air conditioned building in the Vally of the Sun.

Life Before There Was Air Conditioning in Phoenix

Imagine what it must’ve been like for the first settlers to live in Arizona before air conditioning in Phoenix, Arizona. Let’s face it, most of us wouldn’t live here today if our homes didn’t have central air conditioners. In fact, nowadays many Phoenix homes even have air conditioned garages, thanks to ductless mini-split AC units!

Prior to even evaporative cooling, people who settled in Phoenix, Mesa & Glendale figured out other ways to stay cool.

Home Design Before the First Air Conditioning in Phoenix

“Pass-through” Cooling– Homes weren’t the “McMansions” they are today in the Valley of the Sun. Most were modest dwellings, intentionally built to capitalize on any breeze they could get. They incorporated long hallways through the center of the home. The idea being, opening the door at the end of the hall allowing the breeze to pass through the house. In fact, the other bedrooms would have open doors and windows to take advantage of cross ventilation. 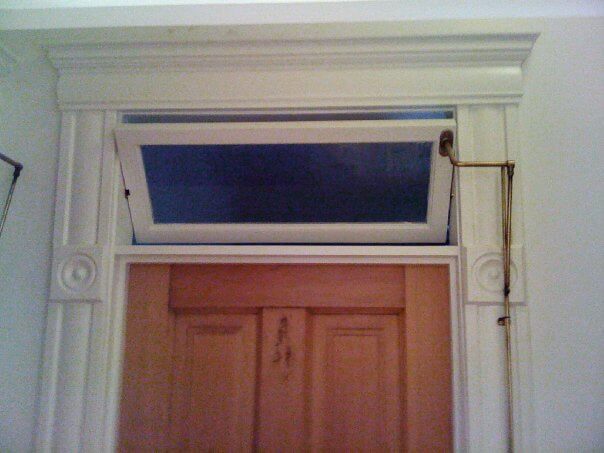 Transoms– Unless you studied architecture, or ever lived in a pre-war built home, you may not know what a transom is! Transom’s are small rectangular windows above the front door that opened allowing air to move across the ceiling & second story.

Wet Sheets! – Yes, I said wet sheets! Early settlers hung wet sheets outside and slept next to them on the porch – hoping for a breeze. Historians report that guests of Phoenix’s Ford Hotel slept on the balcony under human-powered overhead fans. Hotel employees peddled bikes connected to cables which turned the fans!

The First Air Conditioning in Phoenix

Willis Carrier invented modern air conditioning in Buffalo, NY. Thank you Willis! However, it would be close to 3-decades later before the very first air conditioner would come to the Valley. The first building in Phoenix, AZ to have central air conditioning was the Hotel Westward Ho in 1929.

Fox Theater touted itself as the first “air cooled” movie house in 1931. This was definitely something to boast about, and Phoenix residents flocked there for relief in the summer.

At that time, the population of Phoenix was only 48,000 as compared to today at almost 1.7 million. Summers were not as hot back in 1929 as they are today either. In fact, it was population growth itself that played a role in the city getting hotter. More pavement, concrete, and breeze-blocking structures absorbed the suns heat and held it. New homes replaced shade trees and citrus groves, adding to the rising temperatures.

In the 1930’s, the sheer size of an air conditioner prevented them from being installed in homes. This led to the popularity of evaporative coolers, which became widespread in the 1940’s. While virtually useless in the hot humid months during AZ’s monsoon, they provided some relief when the air was dryer. By the early 1950’s nearly 90% of homes in Phoenix had evaporative coolers

At the same time, smaller AC units were being produced making them more affordable and feasible for home central air. In 1953, banks began allowing the cost of central air to be rolled into the mortgage. Builder’s began building homes that touted central air conditioning as a modern feature – a very welcome feature at that!

It was this spread of air conditioning in homes and buildings which led to Phoenix’s expansion. Today, Phoenix is America’s 6th largest city. Reportedly soon to be 5th with only 40k less residents than Philly. Recent reports put Phoenix as America’s fastest growing city again, so we may be 5th by the time you read this. We have air conditioning to thank (or curse) for this population growth!

From the 1970’s on, it was rare for a new home in Phoenix not to have central air conditioning installed. Homeowners with older homes initially built with evaporative cooling only, were adding air conditioners. Many homeowners added rooftop package units, known as a “piggyback” air conditioners. These units utilized the existing swamp cooler air ducts, and were notoriously inefficient.

Another popular application in older areas of Phoenix, Mesa, Tempe and Glendale, was adding an AC condenser & indoor coil. These two components utilized the blower fan in an existing gas furnace to add central air.

While most were happy just to have air conditioning back then, they were loud and very inefficient. Many people used their evaporative coolers until monsoon to keep electric bills down. Today, there are still a select few that swear by their swamp coolers. However, their popularity has diminished and more often people are completely removing their evaporative coolers.

Today’s high-efficiency air conditioners have a lower cost to own than evaporative cooling. They have lower associated maintenance costs, and eliminate the need for water.

Now Efficient, Precise, and Even Controlled by Smart Phones

In recent years Federal regulations switched to “regional standards”. The southwest region, including Phoenix, is required to use more efficient AC units than colder parts of the country. Conversely, those areas are required to have more efficient furnaces and heating systems than required in the southwest. As a result, today’s air conditioners being installed in Phoenix are significantly more efficient than those installed even a decade ago.

This “race” for high-efficiency has resulted in manufacturers adopting newer technologies like 2-speed & variable speed compressors & efficient motors. As an added benefit, these new air conditioning systems provide much more precise temperature control and occupant comfort. Another perk is how quietly they operate, with some seeming practically silent. This was definitely not true of the first air conditioning in Phoenix!

Of course, in 1929, owners of the Hotel Westward Ho were not offered the option of Wi-Fi control. The HVAC Contractor may have been hung in the center of town for practicing witchcraft had he even said “smartphone”!

However, controlling your air conditioning unit via a tablet or smartphone is commonplace today. A lot has changed in the 90-years since the first air conditioning in Phoenix. And, we can expect even more rapid changes in the coming years.

What’s Next for Air Conditioning in Phoenix?

If I had to predict the future of air conditioning in Phoenix, I could just look at what’s already happening! The fastest growing segment of the HVAC industry in Arizona, and globally, is mini split ductless AC & heating.

First used in Asia & Europe, mini split ductless air conditioning is far more widely used than central air around the world. It’s only in recent years these systems gained popularity in North America. Correction… in the USA, as Mexico has been using this technology for years as well.

Mini-split ductless systems are hands-down the most efficient, precise, and quietest way to cool a home or building. By eliminating the need for ductwork, they provide better indoor air quality and reduce the capacity needed while achieving better results.

Do You Need Air Conditioning in Phoenix?

While we haven’t been around since 1929, we have been serving Phoenicians for over 23-years! Magic Touch Mechanical is recognized by the Air Conditioning Contractors of America as one of the top HVAC contractors in the USA.

Contact us today for air conditioner installation, repair or maintenance, and let us show you why we have so many great customer reviews!

Is Variable Speed AC Worth the Money?